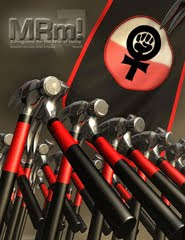 Well folks, I'm almost sad to say, Issue 6 is the last issue of MRm! magazine. The reason I started it was primarily to document, and illustrate, in a persistent format, the writings of the Mens Movement.

It has since become clear that this magazine represents a very real possibility of being a gateway into wider social acceptance. But to do so, requires a shift in approach.

Aside from my goal of trying to 'freeze' for a bit longer articles that eloquently state the reasons the MRM exists, I also want this magazine to further the goal of highlighting injustice, double standards, etc, that men face daily...and effecting the desire and will to change this.

This last bit, it seems, has become more important to me.

So, with a hat tip to our friends over in the Mens Studies crowd, I officially announce the death of MRm!, and the birth of something new. I will remain Editor and such, but Paul Elam will now be joining me as Contributing Editor. His enthusiasm and intelligence are welcome additions to the effort.

The new magazine will talk about mens issues, much in the way MRm! does, in a 'non-confrontational' manner. Sort of like outlining a problem by shooting around it. But there will hopefully be so much more. I would like to include cartoons, of course. But I also want articles on music (perhaps interviews with musicians, etc). I want profiles of artists' work sensitive to mens issues. I want interviews with politicians. Lots of them.

The focus is still men's issues, minus the elements that make the MRM unpalatable to many. But make no mistake. Far from diluting the effectiveness of the magazine, I believe this will only increase it, if done correctly. For instance, outlining the position of Feminist politicians, and the injustice to men, can easily be done without ever painting men as 'victims' or once saying the word "feminist". For inspiration, look to "Lone Nut".

When you convey a point without actually making it explicit (Game anyone), it's FAR more effective.

And with that, I invite any and all who wish to step up to the plate, to do so. I'll continue to troll for gold as well.
Posted by Factory at 2:28 PM