Women in the military

The recent decision to 'include' women in combat decisions has a few people up in arms about such things as physical fitness standards and whatnot.

First of all, obesity is a far bigger 'problem' by most accounts.  Second of all, the existence of these:

I remember watching a documentary about the college professor who developed exoskeleton technology, with the help of one of his grad students, who was a paraplegic.  The technology gave him the chance to walk again.  Stuff like this:

And as it turns out, that department is mentioned in the video.

Point is, it's likely to get a whole lot more 'equal' on the battlefield, because infantry soldiers will begin to resemble pilots of robotic suits more than footsoldiers.

All this being the case, the only physical requirements a soldier would have, would relate purely to being able to do stuff wearing 'gun's n ammo only' type stuff...and as demonstrated by this tasty little morsel: 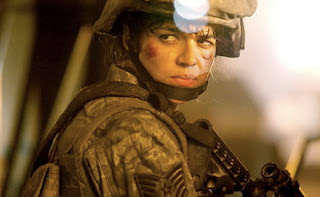 ...such a thing is clearly possible.  Apparently, they even make lighter vests that accommodate boobs...so even that has been taken care of.

Sure a little bit of this is a few years off n stuff...so why 'allow' it now?  Doomsday/Obama's gonna-start-a-war conspiracies aside, a real good reason might be one women and feminists might find less appealing...

They might need the extra time to train the Chivalry out of the men.

Food for thought.
Posted by Factory at 4:13 PM